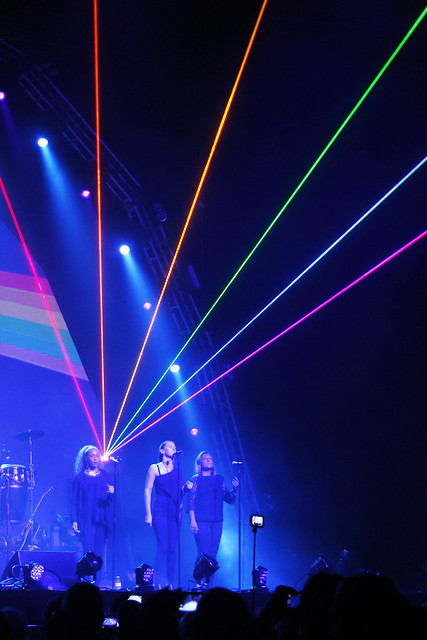 They call themselves “the world’s greatest Pink Floyd tribute show” and man, they are not kidding.

Brit Floyd shone on like a crazy diamond at the South Okanagan Events Centre on Aug. 12 bringing nearly the entire history of the most heralded progressive rock band ever back to life with pinpoint precision.

The hits were all there, Shine on, most of Dark Side of the Moon, Wish You Were Here (album and song), but the real treat for a seasoned Floydian is the deep cuts. Songs like One of These Days off the 1971 album Meddle, initial Floyd frontman Syd Barrett’s See Emily Play and Set the Controls for the Heart of the Sun from 1968’s A Saucerful of Secrets were real treats mostly due to the fact that it is likely   the first and last time people will see those songs performed live, and performed so well that they were virtually indistinguishable from the studio cuts.

The visuals, most of which was originally produced but borrowed from the legacy of Pink Floyd imagery, were excellent accompaniment and really filled out the stage.

A clear crowd favourite was Great Gig in the Sky, with good reason, the vocal solo from Dark Side of the Moon shows off considerable range and was done so well that you wouldn’t be able to tell the difference between the singer and the album if your eyes were closed.

A personal favourite was Have a Cigar off the 1975 album Wish You Were Here, as well as the Pulse-inspired extended edition of Money.

Speaking of extended editions, the few occasions that Brit Floyd took to extrapolate into lengthier, live-version solos and renditions were welcome and well placed.

Of course, everybody got excited for Comfortably Numb, and a nicely timed disco ball lit up during the greatest guitar solo ever, really turning things up to 11, as the kids say.

I truly thought Comfortably Numb would be the show stopper, how could it not be? But after a loud and lengthy burst of applause, a fitting rendition of The Wall’s The Show Must Go On let the audience know that the show, in fact, was still going on. Some fun theatrics and costume changes appeared in some songs I really didn’t expect to see at this show. The Trial, Waiting for the Worms, Run Like Hell and In the Flesh (sans question mark) explored the latter half of The Wall in its near entirety and brought the show to its logical conclusion with the serene Outside the Wall.

I would be remiss if I didn’t mention the light show. It was like the invisible band member draping the room in thematic colours and combining with the on-screen imagery to create a really engrossing visual aspect to already engaging music, and c’mon, what’s a Pink Floyd show without the lasers.

I wasn’t alive during Floyd’s glory days, but getting to see Roger Water’s The Wall in 2012 and having the movie of that tour coming out this year, getting The Endless River (or as I like to call it the Division Bell B-sides) released this year, it has been a great year to be a Pink Floyd fan, and Brit Floyd was the cherry on top.

Dale Boyd is a reporter at the Western News.

If music be the food of love, play on

Prolific offender heads to trial in 2022 for Keremeos charges