Three places in B.C. are among the 10 cities in Canada with the highest number of impaired drivers, according to the latest numbers released Wednesday by Statistics Canada.

Police reported 72,039 impaired driving incidents across the country in 2015.

Kelowna recorded 323 impaired drivers per 100,000 people — second only to St. John’s for the highest ratio in Canada.

Vancouver was 16th, with a rate of 164 drivers being caught while under the influence.

B.C. was actually among provinces with lower rates of impaired driving.

Northwest Territories had the highest rate of 1,211 per 100,000 people, but in actuality equates to only 534 incidents.

Overall, the amount of people getting behind the wheel when they shouldn’t has been steadily decreasing. This latest rate is about 65 per cent lower than what it was in 1986.

RELATED: The federal government and RCMP announce a new pilot project that will use saliva tests to detect drug-impaired drivers.

Nearly half of all incidents occurred on weekends, and between 11 p.m. and 4 a.m., with peaks between 2 a.m. and 3 a.m. from Friday night to Saturday, and Saturday night to Sunday.

With Christmas and New Years fast-approaching, RCMP urge drivers to plan their rides before heading out to holiday parties.

Local Operation Red Nose groups provide rides for those not fit to drive, also driving your car back to your home.

INTERACTIVE: Click here to see how B.C. cities stack up for most impaired driving 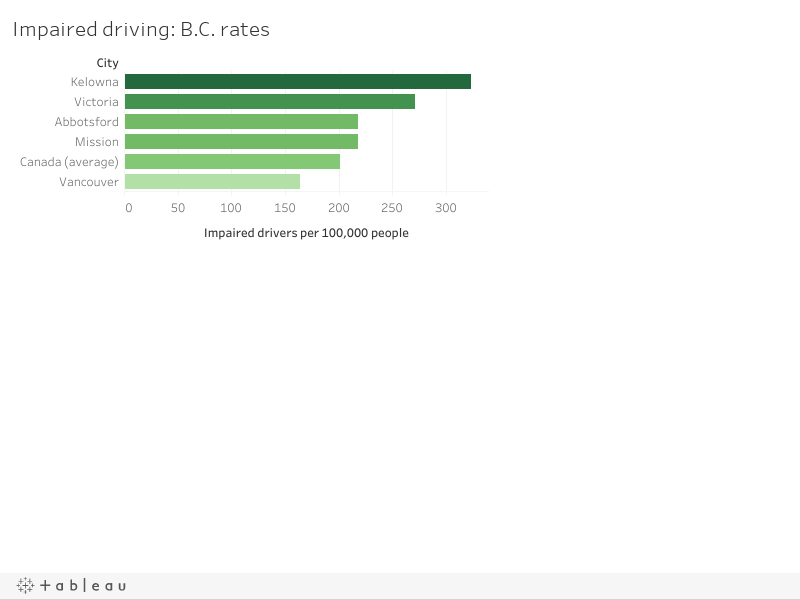 QUIZ: Are you ready for Victoria Day?